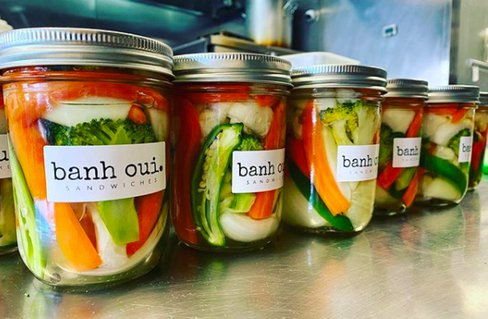 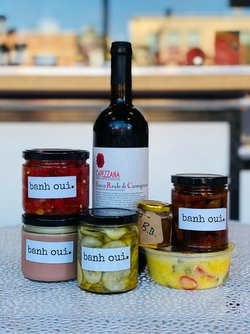 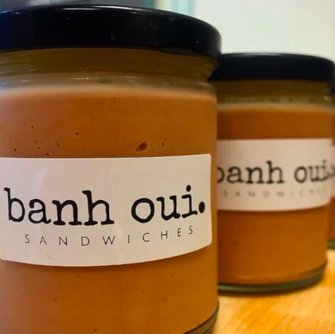 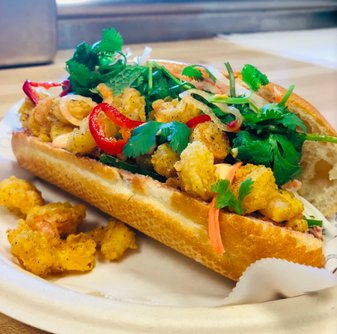 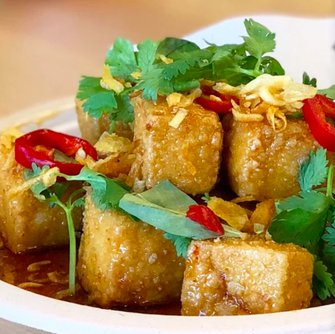 Banh Oui, is a California based fast casual restaurant, focused on quality, flavor and consistency.  Its menu reflects the diverse palate of Los Angeles, with a focus on sandwiches and farmers market driven side dishes. Banh Oui is a play on words, “Banh” in Vietnamese translates to bread and “Oui” in French means yes.

In 2018, after two years of nomadic pop-ups around the city, Banh Oui secured its first brick and mortar located in the heart of Hollywood. Today, 6 months into the "pandemic economy" Banh Oui has shifted its focus from not only being fast casual, but also farmers market driven.  Banh Oui currently carries several Farmer's Market vendor products in an attempt to create a sense of community and support within a now quiet neighborhood.

Banh Oui started in two 10x10 tents at an outdoor market in DTLA. Within its first year of business, Banh Oui took residency at three different locations.  The first was at an old Silver Lake Service Station, where twice a week the company popped up for four hours.  Due to its growing public image, Banh Oui participated in the annual Hilarity for Charity Event, led and curated by comedian Seth Rogan, showcased its menu at several one-off LA weekly invitation only events, and shared the stage with other up and coming restaurants at the Los Angeles Times’ popular TASTE event at Paramount Studios.  Despite not having a brick and mortar, Banh Oui established itself as a stand alone concept and restaurant, often included in food driven events.

The second location was at The Standard’s DTLA Rooftop.  Over 6 months, five days a week during lunch and happy hours, Banh Oui was able to implement staff training, menu tastings, and perform a complete kitchen overhaul to execute their company standard and vision.  In one year, and a total investment of $5k, Banh Oui increased its total revenue by 30%, without owning a stand alone store front.

In 2018, after two years of nomadic pop-ups around the city, Banh Oui secured its first brick and mortar located in the heart of Hollywood.  Now 6 months into the "pandemic economy" Banh Oui has shifted its focus from not only being fast casual, but also farmers market driven.  Banh Oui currently carries several Farmer's Market vendor products in an attempt to create a sense of community and support within a now quiet neighborhood.

Casey Felton started her culinary degree post majoring with an Art History and English degree from Pitzer College. Her first kitchen job was working at Providence restaurant, where she fell in love with the elegance and sophistication of French and Japanese cuisine. After Providence, she furthered her culinary education at Red Medicine, honing her understanding for aesthetic plate up and locally sourced ingredients. Taking a break from fine dining, Casey was hired on as a Sous Chef at The Tasting Kitchen. With an itch for travel, she took a year travelling abroad to Sydney, Australia, where under the mentorship of Chef Angie Hong, Casey further explored her culinary love for Vietnamese cuisine. While loving the creative juices of the culinary world, Casey took a short break from the kitchen to work the FOH operations at Otium restaurant. She continues to expand her love for sharing everything culinary with the people she grew up with here in Los Angeles.

Thrillist LA 30 Essential Hollywood Restaurants You Need to Know Banh Oui - A banh mi shop that takes its sandwiches seriously
We :) Like LA A Holiday Gift Guide for Angelenos Who Want to Shop Local Chef Casey Felton has curated a gift for the person in your life that loves a good charcuterie board.
LA Times Eight great places for takeout banh mi Chicken liver pâté enriches a chicken meatball variation; mint among the usual cilantro and scallions adds piercing grace notes.
Grub Street - New York Magazine Nik Sharma Happily Eats Ice Cream for Lunch “I really love ice cream.” Banh mi that I bought at Banh Oui for lunch. If I could have a banh mi once a week, I would probably do it.
Robb Report How Esdras Ochoa and a Creative Band of LA Chefs Are Reimagining the Taco At Banh Oui, Casey Felton and Angel Padilla recently did a taco pop-up with birria and also the five-spiced crispy pork belly that the restaurant usually puts on sandwiches. This was the beginning of a “culinary lab” where Felton plans to experiment with different cuisines.
Eater LA Sandwich Pop-Up Banh Oui Grabs First Standalone Restaurant in Hollywood Banh Oui opens in Hollywood