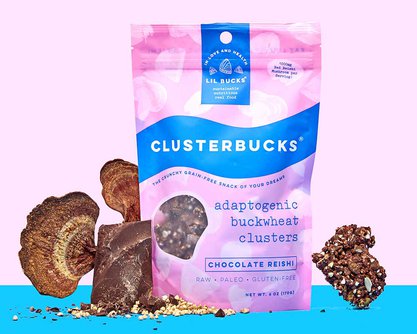 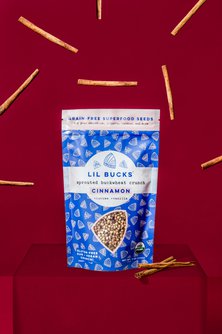 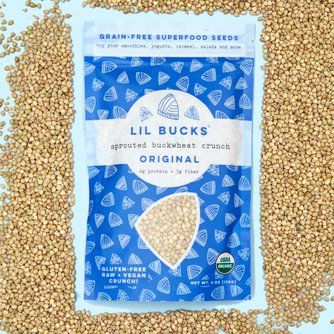 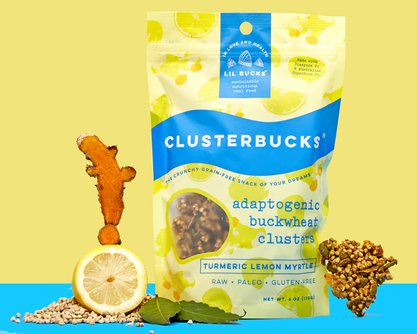 Lil Bucks offers innovative buckwheat-based snack and breakfast products that are made from the protein-packed, raw, gluten-free, vegan and paleo-friendly sprouted superfood seeds. The seeds (which are actually fruit seeds) are sprouted buckwheat groats; sprouting releases enzyme inhibitors, which allows our bodies to better absorb the amazing nutrients and antioxidants in the seeds. After the seeds are soaked, they are dehydrated to preserve their nutrients and give the Lil Bucks their crispy, delicious texture and nutty taste. Lil Bucks are available in Lil Bucks Sprouted Buckwheat Crunch (Cinnamon Vanilla and Original) -multi-serve packages of grain-free sprouted buckwheat seeds- with plans to launch a third flavor in 2022 and in 2020, the brand introduced Clusterbucks (Turmeric Lemon Myrtle and Chocolate Reishi)- adaptogenic buckwheat clusters retailing in Snacks. Featured in the New York Times and advised by Enjoy Life founder Bert Cohen, this buckwheat company is first to market and is expanding nationally in natural retail in 2021.

While living in Australia, Chicago-native and Lil Bucks Founder, Emily Griffith, discovered the potential of the underutilized superfood, buckwheat, and shortly after started Lil Bucks with dual missions: to promote a more nutritious diet while improving soil health in North America. Lil Bucks is proud to source ingredients and work with the amazing companies behind them: DIASPORA CO. TURMERIC – Diaspora is decolonizing an outdated spice trading system, putting money, equity and power into the hands of Indian spice farmers. And in the opinion of The New York Times’, it’s the best, most potent turmeric around. AUSTRALIAN SUPERFOOD CO. LEMON MYRTLE – The Lemon Myrtle is an Australian shrub whose leaves contain the most concentrated source of antimicrobial plant citral. It smells more lemon-y than actual lemon. Lil Bucks is proud to work with the Australian Superfood Co. to source this one-of-a-kind ingredient from native Aussie plants which also support their Indigenous communities.

Emily Griffith is Founder & CEO of Lil Bucks, a high-growth CPG brand pioneering buckwheat in the USA. She has six plus years in digital marketing and web/graphic design for food, wellness and travel brands and she envisions being 'the Quaker Oats of buckwheat'.

I add these to my breakfast every single morning!!! It's the perfect crunch and I shamelessly will eat them by the handful!! This company is awesome.

Amazon Review This company is awesome.

I LOVE Lil Bucks. I love eating healthy and Lil Bucks has it all... good nutrition, organic, protein, gluten free and it has a great crunch! I put it on my oatmeal, yogurt and add on top of smoothies. I'm definitely hooked and highly recommend!

I just wanted to let you know I am Lil Bucks biggest fan! Your seeds have changed my life. I have IBS and have NEVER found anything, from gluten-free oats to nuts to grain free granolas, that didn’t make me sick, until I tried Lil Bucks! Now I can enjoy "granola" again and my breakfast every day is a delight. Just wanted to say thank you from the bottom of my heart. I can't wait for more flavors!