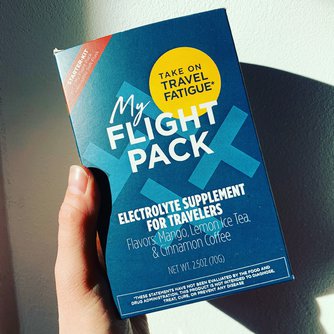 Spending hours on board an aircraft and flying through several time zones dulls the sharpest of minds, exhausts the fittest of bodies, and ruins the most thoughtfully prepared plans. If you’ve ever been on a long-haul flight, chances are you’ve dealt with jet lag. The difficulty sleeping, daytime fatigue, stomach problems, and general “under the weather” feeling all plague hundreds of millions of travelers every year.

My Flight Pack ™️ is a dietary supplement for travelers that helps your body cope with the extreme environment and stress your body experiences when flying. My Flight Pack ™️ is a three-step hydration system that helps combat dehydration in the desert-like aircraft environment. The three-step solution not only keeps you hydrated but also helps you sleep and wake up at the right times, so you can be ready to rock and roll at arrival.

In 2013 when Hannah Grant, the highly acclaimed chef who pioneered “performance cooking,” met Stacy Sims, a scientist at the forefront of performance nutrition research, the journey that would become My Flight Pack began.

The two hit it off immediately and set out to explore ways to improve the performance of cyclists by reducing the effects of physical stress and dehydration. During their research, they looked into the impact that jet lag has on athletes who travel the globe to compete. From this, they became aware of the massive effect dehydration has on the body when flying.

It was a race that was a life-changing and unexpected career shift for Grant, who gave up Michelin-star life in the kitchen of NOMA, based in Copenhagen and then the world’s top-rated restaurant. She’d quit the high-cuisine life when the incessant hours and demands left her with racking joint and hip pain, only to find an even more intense environment in road racing.

Originally hired by the Saxobank cycling team in 2011 to feed its riders for their exhaustive summer at cycling’s three biggest Tours, she quickly learned that the only way to gain the athletes’ trust was by matching the commitment and drive they put in on the bike each day. Her challenge was to convince some of the world’s finest endurance cyclists that her imaginative, carefully sourced, and strategically crafted nutrient-rich foods could boost their performance and provide an edge.

First, she had to listen – and learn.

Grant had no background in cycling, but dived into the psychology of the pro racer to figure out what made them tick. Some athletes might be coming off a good day, others trudging in from a tough slog where simply getting to the end was an achievement. Some were struggling more physically than others, and they all came from different parts of the world and had different tastes. All needed different things on their plate.

Grant had to get the riders comfortable so she began by ensuring that most of each meal was a product they were familiar with, while adding a new twist of high nutrient value. Polenta, quinoa and vodka-based sauces hadn’t previously seen much of a place on the Tour de France, but soon became favorites.

“In 2012, we did the Tour and I documented everything,” Grant said. “I wrote down everything that I cooked, took pictures of it all and I was one of the first chefs to adapt to Twitter. I would post the riders’ meals every night. People loved it because no one had seen something like that before.”

Grant was soon generating as much attention as the team’s cyclists and, almost by accident, discovered there was a market for the recipes and concepts she was feeding cyclists.

Her first publication – the “Grand Tour Cookbook” – was spotted by an American producer who partnered with Grant in turning the book into the Amazon Prime Emmy award-winning docuseries “Eat. Race. Win.” That series title was also the name of a second successful cookbook, co-written with hydration and immune system expert Dr. Stacy Sims.

All the while, Grant’s passion for food-based problem solving and the delicate balance between nutrition and optimum continued to grow. Taking the “Eat. Race. Win.” concept to a range of products with the capacity to positively influence the lives of a far wider audience made perfect sense, and Grant and Sims resolved to team up and tackle an issue as daunting as those soul-sapping climbs of the Tour.

ERW Active breaks down the misconceptions in the sports hydration drink sphere, combating the sugary excesses and outdated science of rival products.

True to form, Grant has thrown herself into the venture with boundless energy. As the product line gathered traction in the early part of 2020, COVID-19 prompted adaptation rather than a slowing down of the company, despite the restriction on airline travel.

“I'm very passion-driven,” Grant said. “I have laser focus on things that I really love and that make sense to me.

That means a refusal to switch out premium ingredients for cheaper alternatives and rebuffing sugar-filled additives that turn so many “hydration” products into effectively sports sodas.

Grant believes the future of nutrition is authenticity and that the public is becoming more educated than ever about knowing what is nonsense and what is a genuine product that provides maximum benefit.

Life is no longer quite as frenetic as during her years on Tour, but she keeps up the grind and puts in the hours because she believes the public deserve to know about a product that was borne out of a ceaseless pursuit of scientific and physiological excellence. That’s an ethos that runs throughout her own life and through ERW, right down to the origin of its name.

“It’s named ERW because it’s the abbreviation of Eat. Race. Win.” she said. “Because that’s the sum of everything I’ve done.” 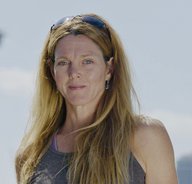 Stacy Sims is an Environmental Exercise Physiologist and Nutrition Scientist, former professional cyclist, college rower (crew), and IRONMAN competitor. Now, as a world-renowned researcher, innovator, and health performance entrepreneur, she understands that even the most fitness-focused people are unlikely to become avowed experts on intestinal health.

Sims is one of the founding partners of ERW Active, a health and hydration range that seeks to give people “tools for the race of life.” She has authored 65 studies and papers on topics such as the effects of gender differences, heat, and altitude on the ability of the body to produce maximal output. Her research even looked at NASA astronauts and how hydration methods for the unique environment of space travel could be used to improve quality intake for athletes. Sims had a remarkable depth of pioneering research to draw from, as the group formulated the ERW and My Flight Pack product lines.

Sims operates in a world of complex science but has found a way of explaining her findings that has earned the trust of the numerous elite and Olympic athletes she advises. She wants people to understand that “the typical sports drink is not appropriate for their bodies.”

Sims is originally from San Francisco and now lives with her young family in New Zealand.