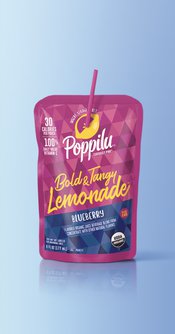 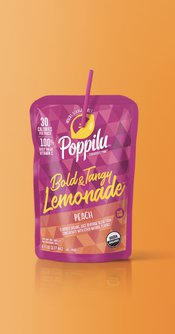 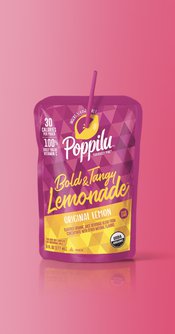 Poppilu offers healthy citrus refreshment for the mainstream consumer to enjoy. Led by mom-founder Melanie Kahn, Poppilu's core product line is its Bold & Tangy Lemonade pouches - the ONLY kids lemonade brand on the market - which give kids an eye-catching and full-flavored new beverage option that meets all the nutrition criteria moms care about. These organic lemonade pouches have no added refined sugar, with just 7g sugar coming from the fruit juice itself - that's the lowest sugar content of any kids juice box/pouch - and 100% DV Vitamin C.  But most importantly for the kids, they have a big bold taste in lemonade flavors including blueberry, peach and original lemon.

Poppilu lemonade pouches are sold in an 8-count carton for $3.99 at grocers including Target, Walmart, and several divisions of Albertsons and Kroger, among others.

Melanie Kahn founded Poppilu in 2017 as the result of an insatiable pregnancy craving for citrus. Uninterested in cloyingly sweet lemonades and expensive, niche functional beverages for the foodie elite, she set out to create Poppilu: an accessible brand that maximizes healthy citrus refreshment for everyone to enjoy.

And so was borne Poppilu, named after daughter Poppy who sparked the pregnancy craving. (Big brother Zachary will get a brand named after him too at some point).

Melanie Kahn is an experienced marketer who got her training at Kraft and Sara Lee. Prior to creating Poppilu, she nationally launched the fairlife® dairy brand and acquired a joint venture partnership with Coca-Cola Co. While at fairlife®, the dairy producer was named the 4th best-selling new US food/beverage in 2015. It was this incredible start-up journey that inspired Melanie’s interest in entrepreneurship.

Melanie founded Poppilu in 2017 as a result of an insatiable pregnancy craving for citrus. Unsatisfied with the available sugary-sweet, not-so-citrusy beverage options, Melanie set out to create Poppilu: an accessible brand that maximizes citrus refreshment in a healthier way for everyone to enjoy. Poppilu was named after her daughter Poppy who sparked the pregnancy craving.  Melanie is also mom to Zachary, and while she doesn’t yet have a brand named after him, she hopes he will forgive her.

Melanie received her bachelor’s degree from Northwestern University and MBA from Duke University. She lives in Chicago, has an odd accent from remnants of her childhood in London and is most often seen wearing fuchsia, biking around town pulling her kids and Schnauzer in a trailer behind.