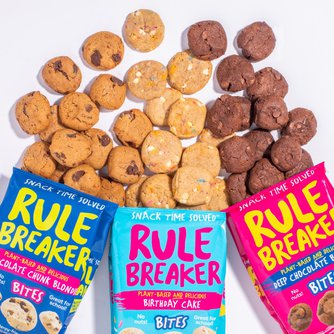 The original bean-based brownies and blondies known today as Rule Breaker Snacks were baked right in the home kitchen of founder Nancy Kalish, a health coach and former health journalist with a serious sweet tooth looking for better-tasting, better-for-you sweet treats. They quickly became a favorite with family and friends and then found success with small independent retailers. Today, Rule Breaker Snacks are available in over 2,500 retail locations nationwide and have seen skyrocketing growth through online, specialty and retail channels. Nancy and Rule Breaker Snacks have been featured in high-level media (including TODAY, Parents, Dr. Oz, The Knot, Consumer Reports and more) and have also collected an impressive list of awards including a prestigious NEXTY Award for best new dessert and a coveted Veg News Best of Show Award for Best New Vegan Product. Rule Breaker Snacks was also chosen as a PepsiCo Greenhouse participant last year. Nancy also pitched the brand on Shark Tank in February 2021.

The snacks now known and loved as Rule Breaker Snacks were first created right in Nancy’s home kitchen as she searched for better-tasting, better-for-you sweet treats for her own family.  Her original bean-based treats quickly became a favorite with family and friends and then earned success with small independent retailers. Leaving her successful career in journalism behind and taking a leap of faith -- Nancy founded Rule Breaker Snacks (a certified woman-owned business) just over five years ago and today along with skyrocketing online sales, Rule Breaker Snacks are available in over 2500 retail locations nationwide including Kroger, Wegmans, Fresh Thyme Market and many others.

Nancy Kalish is the founder of Rule Breaker Snacks. As a former health journalist and certified health coach, she had learned exactly how to eat healthy.  Trouble is, she always had a very unhealthy sweet tooth (we're talking dessert for breakfast). That's why she created Rule Breaker Snacks. Rule Breaker Snacks break all the rules (no flour! no eggs! no butter!).  All of their products are 100% plant-based, which means they’re better for us and better for the planet. Chickpeas (that's right, beans!) are the first ingredient. But their soft-baked treats are so chewy and delicious, you'd never know.  They come in several crave-worthy flavors: Deep Chocolate Brownie, Chocolate Chunk Blondie, Birthday Cake, P'Nutter Chocolate Chip (nut-free) and our limited edition Mint Chocolate Brownie Bites.

Rule Breaker Snacks are also free from many common allergens (no wheat, tree nuts, peanuts, dairy, eggs, soy, fish or shellfish). There's no coconut or sesame either! All of their products are also certified gluten-free, vegan, non-GMO, and kosher (KOF-K) too.  They contain only good, clean ingredients that you can pronounce, and no preservatives.

Now Nancy can finally have a brownie for a snack (or even breakfast!)--and feel good about it. And so can you!